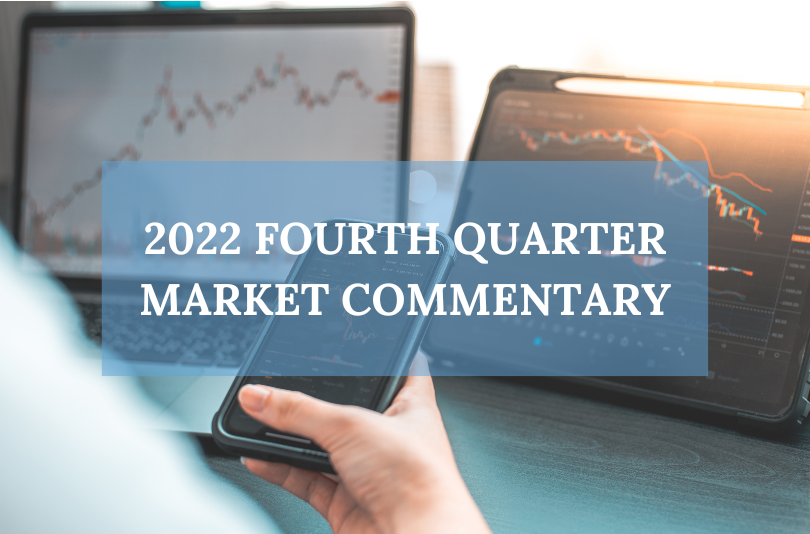 The S&P 1500 Index – a size-weighted universe of large, medium, and small domestic publicly traded companies – gained 7.79% in the fourth quarter of 2022.  And if that isn’t impressive enough, consider that the return would have been approximately five percentage points higher if these five stocks had been removed from the index:

The common bond that unites these companies is that they were market leaders in 2020-21 due to very optimistic growth expectations that ended up being sabotaged by rising interest rates, supply chain issues, weak economic conditions, and foreign market risks.  Meanwhile, stocks of smaller companies, which did not enjoy the same success of the past two years, held up nicely this quarter.  The S&P Midcap 400 Index gained 10.8% and the S&P Small-Cap 600 Index was up 9.2%.  Market breadth was strong, with 61% of the companies outperforming the size-weighted average.

Two other strong trends in the stock market were also worthy of mention:  due in part to the collapse of the stocks mentioned above, and also in part to rising prices for certain commodities (industrial metals, refined petroleum products, specialty chemicals), value investing was much more successful than growth investing.  The S&P 500 Value Index rose 13.6% compared to just 1.4% for the S&P 500 Growth Index.

The second trend was a weakening of the U.S. dollar, which made foreign investments more appealing.  The MSCI EAFE Index of 22 economically developed countries provided a quarterly return of 17.3%, of which roughly half came from local market performance and half from gains on currency conversion.  For the quarter, the U.S. dollar lost 10.2% to the New Zealand Dollar, 8.8% to the Japanese Yen, 8.6% to the British Pound, and 8.5% to the Euro.  This was largely the result of the Fed indicating that it would slow the pace of interest rate increases in 2023, while European banks were doing the opposite.  In Q4 the Fed made two rate increases, on November 2 and December 14.  This is the result of declining inflation numbers – the year-over-year CPI fell from 8.2% in September to 7.7% in October and 7.1% in November.

But the Fed can only directly control short-term rates; long-term rates are controlled by market forces, and those numbers barely budged over the last three months of 2022.  The one-month treasury bill yield went from 2.79% to 4.12% while the ten-year yield only went from 3.83% to 3.88%.  Short-term rates exceeding long-term rates is a condition known as a “yield curve inversion” and is generally a precursor to an economic recession.

The S&P 500 Index is a capitalization weighted index of 500 stocks designed to measure performance of the broad domestic economy through changes in the aggregate market value of 500 stocks representing all major industries.  This index is then split roughly evenly between the S&P 500 Value Index and the S&P 500 Growth Index; the Value Index emphasizes stocks with low price/book value, price/earnings, and price/sales ratios, while the Growth Index emphasizes stocks with above-average sales growth, price momentum, and changes in the price/earnings ratio.

The S&P Midcap 400 Index is a capitalization weighted index of 400 mid-sized companies which reflect the distinctive risk and return characteristics of that market segment.  It is completely distinct from the S&P 500 index.

The S&P Small Cap 600 Index is a capitalization weighted index of 600 small publicly traded companies which meet specific inclusion criteria to ensure that they are liquid and financially viable.  It is completely distinct from both the S&P 500 and S&P Midcap 400 indices.

The MSCI EAFE Index is designed to represent the performance of large and mid-cap securities across 21 developed markets, including countries in Europe, Australasia, and the Far East, excluding the U.S. and Canada. The Index is available for a number of regions, market segments/sizes and covers approximately 85% of the free float-adjusted market capitalization in each of the 21 countries.

The fast price swings in commodities will result in significant volatility in an investor’s holdings. Commodities include increased risks, such as political, economic, and currency instability, and may not be suitable for all investors.

Currency risk is a form of risk that arises from the change in price of one currency against another. Whenever investors or companies have assets or business operations across national borders, they face currency risk if their positions are not hedged.