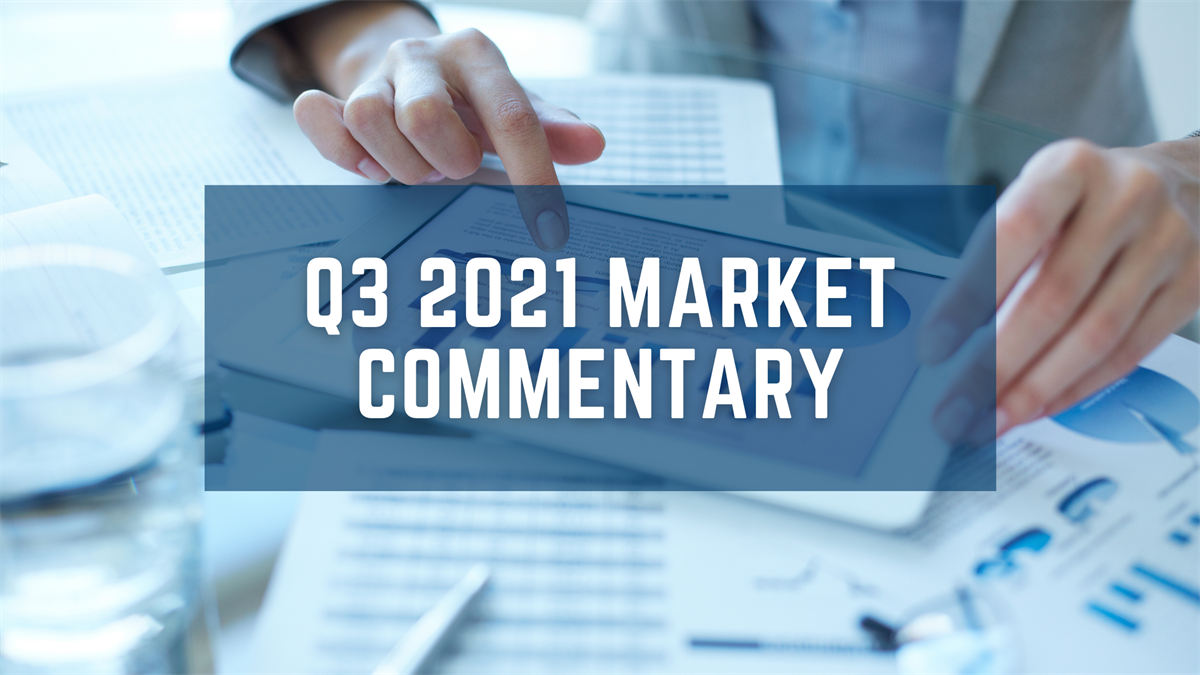 Back in February and March 2020, when the magnitude of the COVID-19 pandemic was first being fully recognized and the economy went into a shutdown, the U.S. stock market lost approximately one-third of its value in just five weeks.  What a difference a year makes!  (Well, 15 months technically!)  From its low point on March 23, 2020 to the midpoint of 2021 the S&P 500 index (a group of 500 mostly American large companies that is used as a proxy for the entire stock market) gained 96%.  Smaller publicly-traded companies did even better, gaining roughly 135% (using The S&P Small-Cap 600 Index).

The second quarter of 2021 was the fifth consecutive quarter where the stock market saw gains instead of losses.  This isn’t particularly uncommon – in fact, for the five years from 2013 to 2017, the market saw 19 quarterly gains and only one loss (in Q3 2015).Skeptics may point to this as a sign that the market is “due” for a decline, but generating positive returns is what the stock market does over time.  In fact, 70% of the quarterly returns since 1995 have been positive.  And this is good news for investors who are saving for retirement.  Younger investors should have fully benefited from this prolonged bull market by being largely invested in stocks.  And older investors, whose portfolios should likely contain a mix of stocks and bonds, will be able to use this surge as an opportunity to sell some stocks at a profit and reposition their accounts in a more conservative way.

Practically every type of conventional investment gained ground in the second quarter, including small company stocks, non-U.S. stocks, bonds, real estate, and commodities.  That’s the good news.  But a closer look at some data reveals a few cautionary signs for the future.  The S&P 500 is a size-weighted index, meaning that larger companies influence overall returns more than small companies.  For example, Apple Inc., the largest company in the index, rose 12.3% during the quarter, which means that the total value of all of its shares of stock went from $2.04 trillion to $2.29 trillion, a gain of $250 billion.  Meanwhile, stock in the much smaller company Dick’s Sporting Goods gained 32%, pushing its total value up from $6.8 billion to $8.9 billion, an increase of $2.1 billion.  So even though Dick’s performed better, Apple created more wealth, which is what the S&P index really measures.

Why are we telling you this?  Because one of the hidden stories of the stock market this quarter is that only 537 of the largest 1500 publicly-traded companies in the U.S. did better than the overall average.  It just happens to be that those 537 are on the large side.  When investors move their money from smaller companies to larger companies, it is usually a sign that they are seeking to manage risk in the face of a prolonged rising market that may be getting “tired” and ready for a modest correction.

The second ominous sign in the quarter came from the bond market.  As a rule, bond prices and interest rates move in opposite directions – that is, falling interest rates cause bond prices to rise, and vice-versa.  In Q2 2021, the total U.S. investment-grade bond market value rose a modest 0.7% (using The Bloomberg Barclays US Aggregate Bond).  This represents fixed income investments with maturities as short as one month and as long as thirty years.  But those securities with maturities less than ten years (a large majority of the market) moved very little in price while longer-maturity securities gained 3.55%.  What caused this?  Well, the yield on the three-year treasury note (a short-term bond) rose from 0.35% on March 31 to 0.46% on June 30, while the yield on the long-term 30-year treasury bond FELL from 2.41% to 2.06%.  This means that the difference between the two – a number referred to as the “spread” – decreased from 2.06% to 1.60%.  As a general rule, the greater the spread (“steepness”), the better the signal for the future economy.  But again, there is little cause for concern since the spread is still near its historical average.  Trouble tends to arise when the spread gets near zero.

For a deeper dive into some of the market details from the previous quarter, click here.

The above data is presented for informative purposes only and should not be construed as investment advice.

The opinions voiced in this material are for general information only and are not intended to provide specific advice or recommendations for any individual.

All performance referenced is historical and is no guarantee of future results.

All indices are unmanaged and may not be invested into directly. Investing in stock includes numerous specific risks including: the fluctuation of dividend, loss of principal and potential illiquidity of the investment in a falling market. The prices of small and mid-cap stocks are generally more volatile than large cap stocks.

Bonds are subject to market and interest rate risk if sold prior to maturity. Bond values will decline as interest rates rise and bonds are subject to availability and change in price. Government bonds and Treasury bills are guaranteed by the US government as to the timely payment of principal and interest and, if held to maturity, offer a fixed rate of return and fixed principal value.

Investing in Real Estate Investment Trusts (REITs) involves special risks such as potential illiquidity and may not be suitable for all investors.

There is no assurance that the investment objectives of this program will be attained. The fast price swings in commodities will result in significant volatility in an investor’s holdings.

Commodities include increased risks, such as political, economic, and currency instability, and may not be suitable for all investors.

International investing involves special risks such as currency fluctuation and political instability and may not be suitable for all investors. These risks are often heightened for investments in emerging markets.

Any company names noted herein are for educational purposes only and not an indication of trading intent or a solicitation of their products or services.

The S&P Small-Cap 600 Index is an unmanaged index of approximately 600 domestic (U.S.) publicly traded companies whose outstanding common stock shares have a combined value in the range of $850 million to $3.6 billion and that meet other criteria for liquidity, profitability, and sector diversification as established by Standard & Poor’s.